There aren’t a lot of inflatable kayaks out there that will allow you to go down a class 4 rapid. Most of the consumer level inflatables only go up to class 2 or class 3. That’s why we were super excited when we found out we had a chance to try the Aire Lynx 1 for a day on the local river.

The Aire Lynx 1 is an inflatable kayak designed for an all day adventure, not on the lake but on your favorite whitewater river of choice. It’s light with its 32 pounds of weight and will hold up to 350 pounds. As you can imagine, the hull of the Lynx 1 is super tough and will be able to withstand jagged rocks, sharp sticks and all other kinds of dangers you face every time you’re out on the water. The durability is all thanks to the material, which is made from 1,300 Denier, 22oz PVC coated polyester.

Some reviews of this inflatable kayak state that you get a set of thigh-straps with your purchase, that is not the case and you will have to purchase them separately. It’s recommended to buy a set if you plan on paddling down rivers that go beyond class 2. The thigh-straps will make maneuverability and handling of the kayak twice as easy, letting you really dig in when you’re paddling.

The Lynx 1 is first and foremost designed for whitewater, and should mainly be used for that, but if you want to do the occasional ride down a calm river or lake, it will do just fine. There’s also a tandem version called Lynx 2. It’s more or less the same watercraft as the Lynx 1, the major difference being how much it can carry and the size. They both come with a 10-year warranty, one of the longest warranty times we’ve encountered.

The Lynx is a whitewater kayak, it’s meant to be used in whitewater rivers mainly. Its tough outer hull can really take a beating and is very well worth the 10-star rating in toughness. It’s very stable with the closed-cell floor and large side tubes, making it the perfect choice for beginners looking to roll down some rivers. The Lynx is not versatile, meaning you’re not going to have as fun on the lake as you have on the river. If you plan on doing whitewater most of the time, this is ideal. If not, we suggest taking a look at something more versatile.

We usually never paddle down whitewater rapids, at best we’ve gone down a class 3 river (which should really be classified as class 2). But when we were offered to try the Aire Lynx out for a day, we just couldn’t say no. To ensure that we could do a fair review we invited our friend, John, that’s been paddling whitewater rapids for more than 20 years.

We chose the closed-cell floor because it is supposedly a lot more rigid and easier to handle. It’s also what everyone else is recommending whenever you bring up the Lynx. You should go for the air-cell floor only if you have to, if you travel a lot or just desperately need to keep it as light as possible for example.

It feels safe thanks to the open sitting area

Compared to other whitewater kayaks, the lynx puts you much higher up and works very much like a sit-on-top in this aspect. Because you’re sitting higher up you’ll have more leverage over the paddles, making it easier to maneuver. As we are complete beginners to whitewater kayaking, we felt really safe sitting in a open kayak. If we were to topple over, we wouldn’t get stuck inside the kayak and risk of potential injury. If you were to find yourself rolling down the river and need to flip your kayak back over, they’ve installed handles underneath the kayak to make this process a whole lot easier.

The open space does have it’s drawbacks, but it’s fixable. Because it’s wide open it’s much harder to control it with your body. We’re comparing them to hard shells, where you can use your whole to steer and maneuver it somewhat, this is just not possible in the Lynx. However, you can buy a set of thigh straps for the Lynx, this are quickly installed and will allow you to get that same amount of control you have in a hard shell.

If you got the skills and experience, you can take it down a class 5

Even though Aire has rated the Lynx up to class 4, we’ve spoken to professionals who told us it’s possible take a class 5 if you have the skills and experience. The large rocker really helps to dampen bigger falls which is also why so many kayakers prefer it for rough whitewater.

We never tried to paddle the kayak in a lake or something calmer than the river, but from what we gathered talking to Lynx owners, it’s pretty much usable in all kinds of water conditions. Some even use it for week-long fishing trips and smaller day trips. Nothing wrong with that but in our opinion you’re better off with something else if you plan on doing a lot of longer trips, you should only buy the Lynx if you’re truly dedicated to whitewater kayaking.

It’s really stable, even for complete beginners like me and my wife

We had a blast trying (with emphasis on trying) to paddle down the local class 4 river. It was hard, mostly because we are beginners, but after a couple of tries we managed to get the hang of it. It felt really stable, even when there were smaller drops and large waves, we always felt safe while sitting in the Lynx. Not to mention our friend John, who seemed to fly down the rapids with this inflatable. To quote him, “Just amazing, I’ve played around with other inflatable kayaks out there but this one, this one is special. It’s just so stable, it makes everything feel ten times easier.”

The Lynx inflatable kayak is made to withstand the toughest of whitewaters, you can bang against jagged rocks, sharp sticks and other rough surfaces, you won’t even scratch the surface. Thanks to the wide base and large side tubes it’s really stable, making it ideal for beginners looking to get into whitewater kayaking.

Even though there are some people enjoying their Lynx during week-long trips, we highly recommend buying something else (an inflatable like the Straitedge) if you plan on doing a longer trips. The Lynx should mainly be enjoyed in a fierce whitewater rapid. 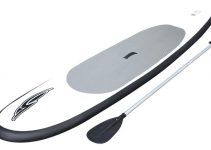 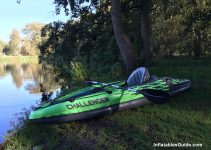 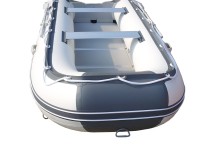