Another highly loved inflatable kayak from Advanced Elements, the AdvancedFrame Convertible (also known as advanced elements ae1007-r) is strong, stable and balanced. This is a tandem kayak and is mean to be paddled by two people, but can be just as well be paddled solo. It’s a lot heavier compared to other inflatable tandems, so paddling it solo can be quite difficult. Just like the Expedition, this kayak is a hybrid mix between a foldable and an inflatable. Most inflatables you see today ride ‘on’ the water, but thanks to the built in aluminum frame the Advanced Elements Convertible rides ‘in’ the water.

The Advanced Elements AE1007-r is 15 feet long and made with heavy duty materials, with three layers of puncture resistant material you can treat this kayak like garbage and it will still float. The fabric on the outside is PVC Tarpaulin covered with 1000 denier polyester. Not only that but there’s an additional double layer of material on top of that. To make it even more durable they added landing plates to the bow and stern to protect the hull of the kayak from rocks and other dangers.

The AE1007-r can be used in lakes, oceans and rivers with class 3 rapids. The tough hull makes scraping against rocks and other rough objects a worry of the past, so going down a class 3 river is nothing to worry about, your kayak will survive.

Thanks to the aluminum frame inside, the kayak glides through the water with ease, like a knife through butter. Combine this with the skeg and you have an inflatble that will track almost as straight as a hardshell.

It has a carrying capacity of 550 pounds and can hold plenty of gear, even more if you plan on riding solo. It has a mesh pocket in the front, and if you install the additional deck you’ll have two mesh pockets in total.

One to thing to keep in mind when purchasing the Advanced Elements Convertible is that there are no accessories included. Things like paddles, pump, spray skirts and the additional solo deck are all sold separately, which will bring up the cost at least a hundred dollars. On the bright side, you get to choose exactly what you want, no need to be stuck with low quality oars or a pump that will break on you.

Wow! That’s all we can say about this tandem from Advanced Elements. It’s not as portable as other tandem kayaks due it’s weight, but that’s about the only negative about it. It has plenty of leg room and storage, we could fit all the gear we had with us with no problems. It’s made out of super tough materials that can really take a beating. It tracks straight like an arrow and will do most water conditions. We think this as close as you can get to a hard shell kayak with an inflatable one.

Just like Advanced Elements Expedition, this kayak is a blast to ride, the tracking, storage capabilities and the option to either use it as a tandem or a solo kayak is what we love about this boat.

Quick and easy setup
Setting it up is simple and straight forward. Even though it has a built in aluminum frame it’s easy to unfold and start inflating. From unpacking it to fully inflating it will take you about 15minutes, it all depends how quick and experienced you are. We can usually inflate most of our kayaks in 10-15 minutes, but we’ve been kayaking for years. Don’t be surprised if it takes you 20-30 minutes the first time!

Dries up slowly
Something we do not enjoy too much with this kayak is its drying time. Because they have used a heavy duty fabric, it takes a while to dry completely. We found that we actually needed to pull the floor out and the shell as well to have dry properly. Unless you fully disassemble it, you’ll have to wait a long time before it dries up completely.

No accessories included
As you may already know, the AE1007-R doesn’t come with any accessories, things like paddles, a pump, spray skirts and extra decks. We don’t see this as something negative compared to a lot of other people. Why? Very often the included pumps and paddles are cheaply made and will sooner or later break on you. Now you’ll have the chance of buying high quality paddles that will last a life time and a pump that actually works. Get yourself an electrical pump and you’ll have everything inflated and ready to go in a matter of minutes.

Reclining in your seat is hard
We love to be able to recline in our seats when taking a rest but it just wasn’t possible for us to find a comfortable position. The seats are still plenty of comfortable, especially when you compare them to hard shell ones. The included seats do not have any lumbar support but it’s possible to buy it as an extra accessory.

Tracks perfectly, even in moderate winds
We never encountered any problems with the tracking either, it tracks straight as an arrow, even in moderator wind conditions, we paddled in 10 knot winds and didn’t experience any drifting.

Tough and stable
Since Advanced Elements claim that his kayak can take class 3 rapids, we had to give it a shot. We took it to a river that has an extremely rough bottom, rocks, sticks and banks are literally everywhere. It was a rough but stable ride down the river, actually a lot more stable than we would imagine. Upon closer inspection we had a few scrapes and scratches, but nothing had been punctured and we could go down the river several times over we wanted to.

Our advice to you
As a last piece of advice we recommend installing the aluminum backbone, it does require a little fiddling to get it perfectly centered during the inflation process, but boy does it makes a difference! It gives the kayak a much more rigid feel and will not flex as much when paddling in wavy conditions.

We just want to remind you that this is heavy kayak, if you plan on going kayaking with hard shells, don’t expect to be able to keep up with them. The AE1007-R is best used for sightseeing and leisurely activities, not for racing your friends with hard shells.

The Advanced Elements Convertible is a well built and long lasting inflatable tandem kayak. Because of its weight and size it might not be a speed demon, but it was never meant for that either. The 1007-R is meant for people looking to get out on the lake and enjoy a nice day, and occasionally take it down a river or two. It might be cost a little bit more than your average inflatable tandem, but for a good reason, it’s built like a tank and will you last you many years. 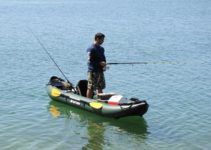 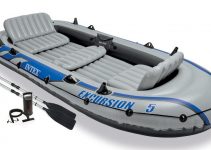